Small stores are facing hard times, as the pressure from online and big box retailers builds. Many stores are forced to go out of business, leaving downtown empty. Fact to the matter is, that usually customers prefer the cheaper prices of larger retailers over the convenience and personal touch of mom’n pop stores.

Obviously everyone, including the smaller stores want to offer the lowest price to the customer and get as much business as they can. However low retail price often comes with scale. If you order 100 items, you have much less bargaining power than if you order a 1 000. Then why wouldn’t the smaller stores just order more inventory? This is in the heart of the problem. You see most of any small business’s capital is tied in inventory. If a television or a piece of clothing is standing in the store unsold, that money can’t be used to pay bills or salaries. Small businesses can’t take too many risks when ordering products.

What about discounting then? Couldn’t the stores order extra, sell what they can and sell the remainder at a discount. This is where the story gets interesting.

Did you know, that shops can’t always give as big discounts as they would like. There are many reasons. Usually brands have a minimum advertised price, which means that no retailer can sell the product below that price. This is usually either because price reductions would destroy the value of the product or they fear that extreme discounts will cause customers to return previously bought units to benefit from the sale.

Some retailers take the risk and offer these discounts, but a growing number of them have started to rely on a site called DealDash to manage the discounting risks. DealDash buys the products from these retailers at a discount and then host pay-to-participate auctions and sell the products one by one. Now why would you pay to participate in an auction, when the winning isn’t guaranteed? Because all the participants paying for their bids subsidize the price for the winner. That way, someone gets a great deal, way below the minimum advertised price.

Here’s the interesting part, it’s in DealDash’s best interest to make sure most of the bidders find good deals on the site. If no-one would win anything, users would quickly disappear. If however, users on average win good discounts, they will keep returning. The site has been running for almost 10 years, so it must be doing something right. Most active DealDashers say that the trick is to hedge the bids; participate in 5 auctions instead of one. You shouldn’t expect to win every auction you enter, but the once you win will more than make up for it.

Auction Observer is an informative auction resource run by DealDash.com. 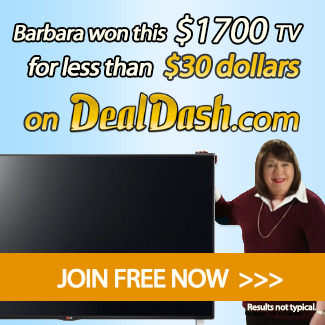